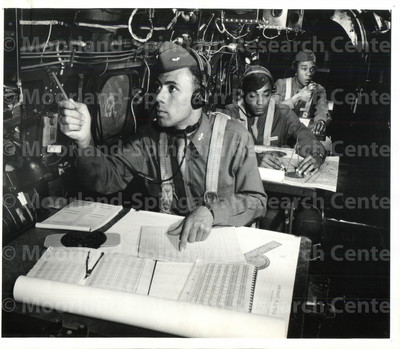 This trio of Negro navigation cadets at Hondo Army Air Field, Hondo, Tex., spell trouble for the Axis. Each has almost concluded 18 weeks of strenuous air and ground training at the huge navigation airbase, and has flown approximately 15,000 miles in the process. They can plot the aerial course of an Allied bomber by day or by night, using a combination of four methods of combat navigation. They can find the way by the stars, by radio by reference to familiar landmarks on the terrain below or by using delicate and accurate navigation instruments. Shown seated at navigator's desks in a Lockheed Ledestar, twin-engined navigation training ship, these men use a five-cent lead pencil and many navigation told to learn how to guide thousands of dollars word of death and destruction to enemy targets. Front to Rear: Aviation student LeRoy F. Gillead, New York City, reading radio compass; Aviation Cadet Everett E. Richardson, using dividers to mark a course on a navigation map, and (rear) Aviation Student Reginald A. Freeman, talking to pilot on plane's interphone system.