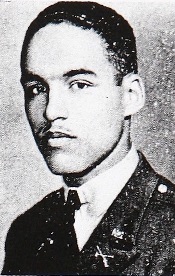 Howard University Men and Women in the Armed Forces

The Committee on Howard Men and Women in the War, under the guidance of President Mordecai Johnson and Dr. James Nabrit, waged a campaign to locate all former Howard University students in the Armed Forces. The various organizations and schools of the university, faculty, family and friends were encouraged to give name, rank, class year, and mailing address of former students for the purpose of maintaining a complete university record; as well as for keeping the men and women in the service abreast of activities of their alma mater, and former classmates.

Announcements, bulletins, letters and memorandum were sent out to Alumni requesting information as to the hereabouts of Howard students in the service. What resulted from this effort was an interesting and valuable collection of letters written by former Howard University men and women in the armed forces. This collection of letters was donated to the Moorland Foundation in 1946. An attempt was made in 1946 by Mrs. Dorothy Porter to add to the initial collection of letters. Requests were sent out to Department Heads of the individual schools within the university, to donate any available letters by Howard faculty members, alumni and students from Howard GI's. There is no indication. However, that any further donations were added to this collection.

Browse the Howard University Men and Women in the Armed Forces Collections: